The episode where Subaru comes up with a crazy plan and it works without him dying? What? (Spoilers)

I have to say, just like last episode, the tone and atmosphere were on point. I really enjoyed this one. I knew that Subaru would not emerge from the battle against the mabeasts unharmed but I wasn’t expecting him to be cursed.

When Beatrice revealed that Subaru would die in half a day because of the huge amount of curses he received, thanks to the beasts, it bothered me a little. I was expecting one of the kids to be in a critical condition but I guess this problem is better for Subaru. 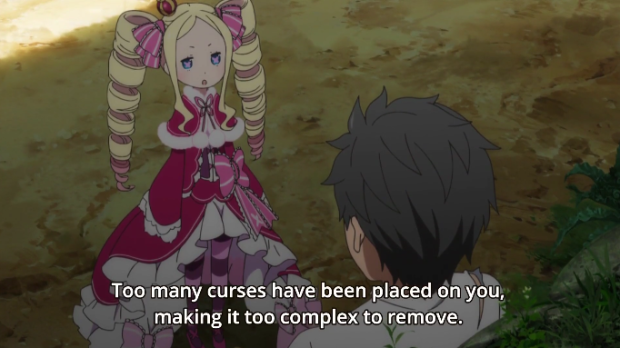 Subaru has died four times already, all of them in such a graphic and vomit inducing way. Obviously he isn’t going to be afraid of dying due to some curses placed on him. Deep down he is scared, but we don’t need to see that, most of use already know. So what we see is Subaru completely focusing on saving Rem, who has taken it upon herself to find a way to save them.

It’s great to see that the moments they had last episode has made an impact on Rem who has seen how much of a good guy Subaru is. Yes, he’s incredibly weak and irritating at times but that’s what makes me at least want to root for him.

The focus on Ram, who desires to save Rem as well was interesting. While their interactions havent’s been much, we can see Ram’s disapproving attitude towards Subaru change. After Ram mentions to Subaru a little of her backstory ( which I hope we see next episode) he comes up with the crazy idea of using RBD (Return by Death) to draw the mabeasts towards him which suprisingly works.

Rem finds Subaru and Ram but has lost control of herself because of her demon horn. After some struggle with his decision, Subaru cuts of Rem’s horn, at least I think he did, we didn’t see it but the episode ends leaving me a little annoyed at that cliffhanger.

I have to say, I love that Subaru isn’t your typical MC who is able to make a decison, stick with it and save the day. He struggles, he panickes, he cries, he’s a human being.

While this isn’t the first time we’ve seen this, it’s great to see again Subaru step up and try to brave, make a crazy plan that works and not worry about the concequences. I enjoyed Ram in this episode, there hasn’t been much focus on her but I’m glad she able to show her clairvoyance and wind power, she’s pretty powerful but not to the point where she seems overpowered.

I’m hoping next episode has some intereactions between Subaru and Rem and hopefully some focus on Subaru’s curse and what decision he’ll come to regarding that.

Overall, great episode and I look forward to the next one.