This was an ok episode. That woman was surprising at the beginning though. She reminds me of Saber from Fate Stay Night.

The fight between Mamika and the other creators is quickly broken up by a blonde haired woman riding a horse with wings. This woman literally came out of nowhere I wasn’t expecting her come out and clash with Yuya for a bit and then leave with Mamika. “I was like Saber is that you”?”What are you doing in this show”?

The next scene had Yuya having a conversation with Souta’s group for a while in a family restaurant. This would have an alright scene if it wasn’t for the exposition. It was quite long. So Yuya tells the group that he had a talk with Military Uniform Princess, she was with an old man for some reason.

I hope they explain him at some point in the show. Yuta knew what she was going to ask him and refused. Remember the Military Uniform Princess wants to modify each creators world by using their creators. And Yuta doesn’t like this.

Yuya believes this to be unimaginative. He goes on to say that he would like his friends and his enemies to be in our world and join in the fun with him. I wouldn’t want to meet any of Yuya’s enemies.

Souta and the girls think about trying out what Yuya said in the restaurant. They want to see if Mr Matsubara can change Celestia’s abilities if he writes about them. Celestia’s illustrator even stops by and joins in after she explained to about what’s going on, she draws a beautiful picture of Celestia but in the end it’s all for nought.

The idea may have not worked but it brought the team closer which was great to see. Celestia had been watching Souta as he wanted to be an illustrator, she encourages to draw again by telling he has time to learn how be confident Illustrator.

It was nice moment between the two. I wasn’t expecting Celestia and Souta to be close since its only episode 3. I felt it was a bit early, but it’s better to develop the characters now than later down the line. I hope we get to see Souta draw at some point in this show.

There’s a scene with Military Uniform Princess talking to herself. I think she was talking about her creator. I’ll be honest I didn’t really understand the scene. I’m also wondering why Mamika is there? We saw her fly of with the blonde woman, is the Pegasus lady working with Military Uniform Princess? Maybe I wasn’t paying attention at the end of scene since I watched this late at night. 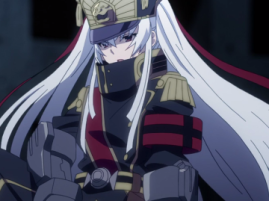 I’m so curious about the characters and the mysteries of this show that I seem to be questioning everything. I won’t type the up, I’ll keep them to myself for now, I’ll go over my typing limit if I type them down. XD Yuya bothers me, he talks to much which made the restaurant scene boring with the back and forth dialogue.

I do like that his personality, he isn’t really evil. I can see him more as an anti-hero funnily enough in his world. I enjoyed the characters in this episode,some of them had nice moments. I loved the scene between Celestia and Souta on the balcony. The two have become great friends.