I’m glad that Akko got to use the shiny rod again. Lovely animation and the music is nice.

So we have Akko going through her first day at Luna Nova academy. The memorial tree is dying and to fix it, Diana, the blond girl earlier in the episode, tries to cast a spell to fix the tree. But she makes a mistake, Chrysalis start sprouting from the tree all over the school.

Akko and her friends run over to the memory tree. Tree branches and Chrysalises start sprouting all around Akko, her friends and Diana.

Diana reveals that the Chrysalises have parasites in them and that’s what is causing the trees decline. Diana casts a spell on the tree which kills the Chrysalises but Akko realises they are not Chrysalises and tries to stop Diana from casting her spell, she gets hit by Diana’s magic and falls.

Papilliodya Chrysalises is what the parasites are. It’s what Akko realised they were, thanks to her Chariot card. They’re magic butterflies that only come out once every 120 years.

The shiny rod glows and Akko chants the papilliodya spell. The spell works and the magic butterflies are free. Diana is looking at the memory tree, when her friends and the teachers congratulate her on fixing the tree, she tells them that she didn’t do it, but her words fall on deaf ears as everyone is praising her.

I’ve never liked the way they do that, just speak up. The episode ends with Akko and her friends on broomsticks waving to the magic butterflies in the air. 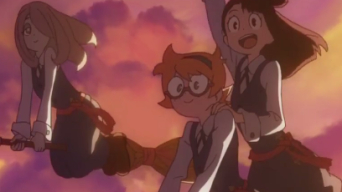 This was a nice episode. I’m glad that Akko got to prove that the shiny rod works to Diana. Hopefully now Diana will treat Akko kindly but I doubt that will happen. Every anime needs rivals.

Diana will probably treat Akko with disgust when she’s with her friends, but privately she’ll probably thank her for saving the tree. What’s with anime having the always perfect, can do no wrong, talented character whose a rival to the main character? I’ll never understand the appeal of that kind of character.