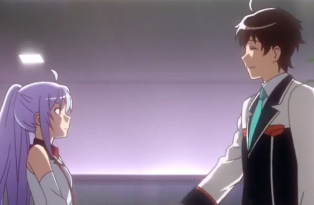 This is the first episode and I’m crying ! Why?? *grabs a lot a tissues* (Spoilers for Episode 1)

Mizugaki Tsukusa is our main character and he starts working at the terminal service department. Their main job is to collect Giftias (Androids) that are close to their expiry date. A Gifias life span is 9 years and in those years they are either looked after by a caretaker or they work.

When a Giftia reaches the 9 year lifespan, their memories and personalities disintegrate. Tsukasa is an ok character, he’s new at his job but still strives to get to know the rules of the terminal service department and that makes him ok in my book. 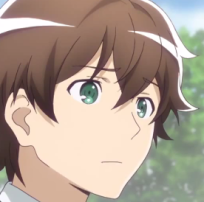 So the first episode focuses on the characters and  the relationship between humans and Giftias. The scene that made me cry was at the end of course. So Isla and Tsukasa have gone to retrieve a little girl called Nina who is a Giftia reaching her expiration date. Her caretaker is an old lady who refuses to let them take Nina away.

It wasn’t until she heard Nina’s conversation with Isla in the bathroom that she decided to sign the agreement form. You see, Nina is already aware that Isla and Tsukasa came to retrieve her. When Isla asks Nina is she’s scared of losing her memories Nina say she’s doesn’t know. And we find out here that Isla is scared of losing her memories. She says that is she couldn’t store her memories, then she could live automatically, driven by her programming.

I knew she was scared already as her hands were shaking as she tried to ring the doorbell when Tsukasa and her were on a job earlier. Nina says she wants to stay with her Grandma but if thing continue she will break. Keep in mind that her Grandma’s hearing all of this which makes this all the more heartbreaking.

We get to the scene were Nina is about to lose her personality and memories, she talks to her Grandma one last time. She tells her to dry her hair after she takes a bath, don’t water the flowers too much etc. At this point I’m already crying, I stopped caring about holding it in. The soft music in the background, the voice acting, it’s all too much for me.

Nina’s Grandma reassured her, she will be fine. Isla puts the a ring on Nina’s hand and presses her hand up to Nina’s, this is the way the Giftias are deactivated. I wonder what Isla whispered to Nina before she was deactivated?

This was just sad all of it. This first episode showed how loved the Giftia’s are by their caretakers to the point where some don’t want to let them go.I hope that Isla loses her fear of deactivation.

I loved this episode and can’t wait for the next one.